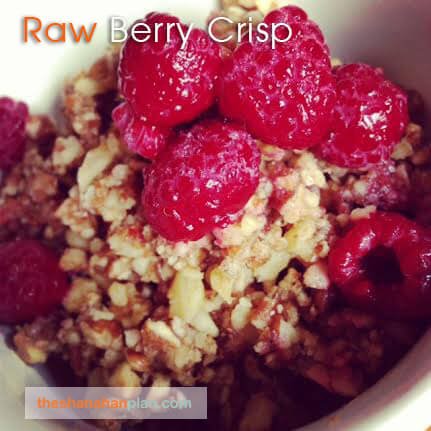 Made with a base of raspberries, various nuts, dates, maple syrup, and cinnamon, there’s no way this raw berry crisp won’t be a home run! Perfect for desert, a snack, or even breakfast, raw berry crisp is popular with kids and serves as a great way to feed them some good protein.

“I don’t know about you, but when I go to grocery stores on “sample” day, my heart hurts a little. Ever since going strict Paleo, I can’t sample ANYTHING! You’ll find everything from Hot Pockets stuffed with fluff to the latest and greatest protein bar packed with sugar. It’s rather depressing, right? Sometimes I’ll get lucky, however, and they’ll be sampling out meat. In that case, I hover around their kiosk like a starving vulture on the look out for my next meal. Watch out!

Well, when I walked into Whole Foods about a year ago, they were sampling out a Paleo-approved dessert….WITH the recipe (which is how, of course, I discovered it was Paleo). I was in heaven! After sampling way too much, I bought every ingredient on that recipe and went home and made it that day. It so happened that  my husband and I were having friends over for dinner that night. They loved this dessert and ate every last morsel. I sent them home with happy tummies (is that a word?) and the recipe. That was one point in my life where I realized that eating “healthy” and eating Paleo doesn’t have to be boring. Sure, you don’t want to overdo it on the maple syrup and dates, but you can have some fun every once in awhile.” 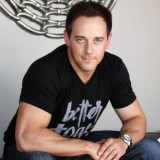 Terry Shanahan is a functional nutrition and performance consultant, blogger, and online coach. He works with individuals ranging from those at the pinnacle of professional sports, including CrossFit Champions, NBA and NFL stars, and Olympic medalists, to individuals suffering from chronic health issues including autoimmune, endocrine, inflammatory, and digestive disorders, to those who simply want to improve their quality of life, health, and physical appearance. A life-long sufferer of chronic illness, fatigue, and inflammation, Shanahan spent more than a decade in and out of doctor’s offices, visiting specialists around the country seeking the answer to why a seemingly “fit and healthy” individual should be so unwell. Frustrated, Shanahan took his health into his own hands, devoting his time to studying diet, natural remedies, and supplementation – and experienced amazing results in a short period of time. Inspired by his experiences overcoming his own personal health struggles, Shanahan has devoted his life to helping individuals who want to be helped and who are willing to make positive changes in their lives.