Pumpkin is so popular this time of year, which is why most of us gobble up recipes for chocolate chip pumpkin cookies and DIYs like pumpkin spice room spray and pumpkin spice sugar scrub. We can’t get enough! And because we can never get enough, this paleo pumpkin smoothie was just added to our list of “must-try’s”. This smoothie is easy to make at home and would make a terrific breakfast, especially for those of us on the go. It’s custardy texture makes it slightly decadent without being overly-sweet. It’s also a fantastic canvas for other added flavors like cocoa powder, raisins, or even bourbon (although we don’t suggest you try that combination in the morning 😉 ). What would you add to this smoothie?

“I have a history of being slightly obsessed with pumpkin. Not just during the holidays, but year round. I try to keep it managed so people don’t start to suspect my addiction to everything pumpkin or pumpkin pie. This recipe was made out of a need for a simple and affordable smoothie to tantalize some taste buds. It is not like any other pumpkin pie smoothie I have made before and can be best described as custardy in the best way possible. People (including myself) go out and spend $6-10 a smoothie some days and it’s such a waste of money. You can make 10 at home for the same price which is what this one is for. We all love saving money and having more to spend on bacon.

This smoothie is also a perfect base to launch into any other crazy flavors you can think of. I have been thinking about adding some dates and cocoa powder and maybe even spiking it with some “paleo” alcohol. What is your favorite smoothie flavor that you would pair with pumpkin? I want to try some things out of my own creativity zone so let me have it. Oh I just realized we can blend this with some cold brew coffee for a nice pick me up. So many possibilities.” 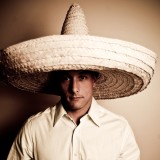 George Bryant is the creative genius behind the wildly popular Paleo food blog “Civilized Caveman Cooking Creations.” After spending the first 20-something years of his life in a constant battle with his weight, and then nearly losing both his legs while on deployment as a US Marine, George took matters into his own hands and began his own Paleo-journey. What started as a simple place to post recipes for friends has since turned into an award-winning food blog. After being in the Marines for 12 years, George has since been medically separated and is enjoying working fulltime creating delicious Paleo recipes, while hoping to change as many lives for the better by making REAL food recipes simple and tasty.