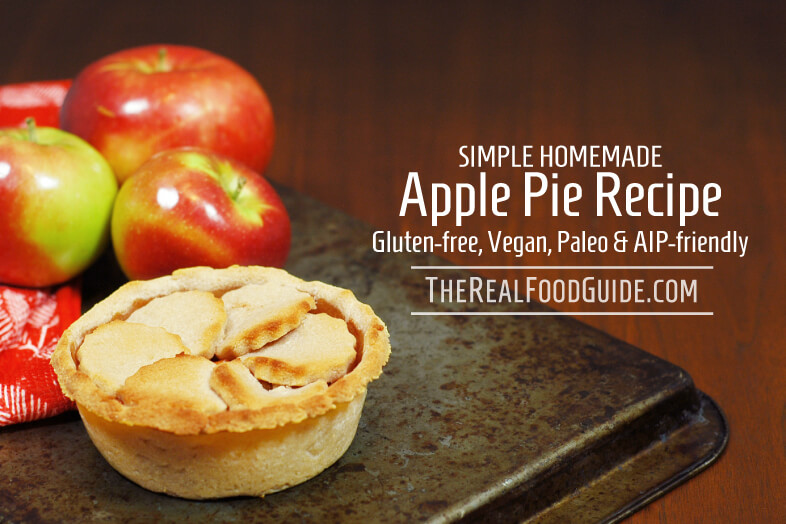 Apple pie is a classic American staple typically made with flour, artificial sugar, and a slew of other bad ingredients. The good news is that an apple pie recipe without these ingredients exists – and here it is! Made with natural flours and coconut oil, this simple and homemade apple pie recipe is gluten-free, vegan, Paleo, and AIP-friendly. Plus, it’s absolutely delicious.

“Riding on the success of the pumpkin pie recipe, it seemed natural to branch out and expand the pie repertoire with a simple homemade apple pie recipe that is suitable for people who have multiple food allergies, sensitivities or intolerances. This apple pie recipe is gluten-free, grain-free, paleo and autoimmune-paleo (AIP) friendly, and includes vegan options as well. The best part is, you can even get away with serving this to people who don’t have multiple food issues and they likely won’t notice that it’s missing things like eggs, dairy or nuts, since it still tastes like an apple pie should!

One note though, because the dough for the crust lacks eggs and regular flour, it isn’t as easy to work with as a regular dough, so I went with making mini-pies to avoid the frustration of having the dough rip. The dough holds well enough for mini pie plates, but you may find that you’ll need to patch it if you do the same recipe for a regular sized pie. I do love these non-stick mini pie plates though, since the pies come out so easily. For the test recipe, I’ve made the top crust using a small, scalloped cookie cutter, but you could roll out a simple top crust that covers the entire pie. Just make sure to slit some vent holes to allow the steam to escape.” 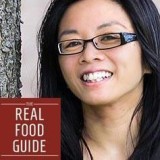 My name is Vivian, and I’m the founder/editor/writer/designer and beyond at the Real Food Guide. I’ve got a background in both biochemistry and design (apparently I like university a lot), and most recently I’ve been studying holistic nutrition at the Canadian School of Natural Nutrition. I believe that each individual needs to go on their own Real Food Journey, because what works for me, may not necessarily work for you, as we all have our own individual biochemistry, gut flora and health histories. Some people may flourish on a vegetarian diet, while others require more nutrients that can only come from animal foods. As a budding nutritionist I believe that you need to be your own advocate for your health and wellness and figure out where you are in your own journey.